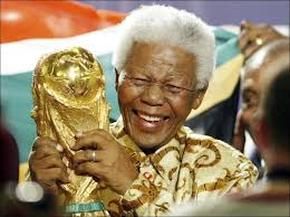 The FIFA World Cup in Brazil is heralded as one of the best world cups. It was full of upsets, new star players, and a champion that epitomized a true team. The World Cup is the most popular sporting event worldwide and it brings together people from all over the world. The power of futbol or soccer is grand. According to a quick google search around ~3.5B 1 people watch soccer worldwide and ~200-300M people play soccer worldwide 2 (Including a growing number of women). The beauty about soccer is that it is a coordinating device and a passion shared by ~50% of the world population. People don’t like agreeing on things but they do agree on their passion for soccer. Remember this.

One of DSO’s clients, Cameroon Development Football Program understands the power of this coordinating device and is using soccer to empower and educate the youth of Cameroon. Today is Nelson Mandela’s birthday and is also known as Mandela Day. Mandela, like CFDP understood the power of soccer and sports and used it as a coordinating device for attempting to unite races in South Africa and as an emotional outlet when he was in prison. Mandela understood the importance of finding common ground to catalyze his campaigns for freedom. Mandela won the Nobel Peace Prize for his “peaceful, non-violent defiance against the South African government” 3. Today on Mandela day, I urge us to think about the lessons Mandela taught us and think about how we can apply those lessons to our growing number of challenges. We should be ashamed when we choose violence over discussions and create reinforcing systems that put more and more innocent citizens at risk.

Before going any further I want to make a few caveats about this post:

1.      I am not an expert and have not been trained academically on the topics of Mandela, foreign policy, sports for development, and today’s political current events.

Before every game at the world cup there was a handshake of peace. According to the FIFA website, this handshake for peace “is a gesture of friendship and respect intended to inspire the world to unite in peace, solidarity, and fair play” 4. The Norwegian Football Association and the Nobel Peace Center in Norway developed this understanding about how powerful soccer was as a coordinating device as well as the importance of peace, solidarity and fair play. Unfortunately, these handshakes, that took place before games started, didn’t feel authentic. Often countries involved in these handshakes were participating in activities that went against peace, solidarity, and fair play.

If we really want to celebrate Mandela Day lets embrace coordinating devices, participate in more discussions, and find some way of changing the status quo.